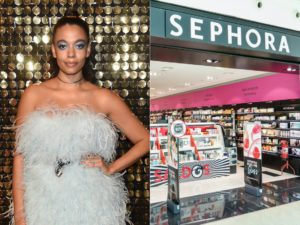 After Designer Aurora James called out four of the biggest retailers in America to commit to a 15 percent pledge, Sephora has been the first major beauty company to accept the challenge. Sephora has pledged to devote 15 percent of its shelf space to Black-Owned products. Before the pledge, the beauty company only carried three major Black-Owned beauty brands including Fenty Beauty, Pat McGrath Labs, and Briogeo.

We’re joining @15percentpledge and @aurorajames. We recognize how important it is to represent Black businesses and communities, and we must do better. So, we’re starting now.

“What a difference a week makes. A little over a week ago, I wrote an Instagram post and called on four of the biggest retailers in America to commit to a #15Percent Pledge. That idea quickly became a movement and [an] entire organization. And now today, we are thrilled to announce that, of the four businesses we named, Sephora is the first to take the pledge. With unparalleled influence and power, not only in the beauty industry but in retail at large, Sephora is making a historic contribution to the fight against systemic racism, economic inequality, and discrimination by taking this Pledge. We commend their early leadership and look forward to working with them on their accountability and commitment as we win together in the mission to put billions back into the Black Community”, Stated James.

We’re joining @15percentpledge and @aurorajames. We recognize how important it is to represent Black businesses and communities, and we must do better. So, we’re starting now.

She continued by stating, “I’m not going to stop. This is really about standing up for economic equality and racial justice. People are like, ‘Well, it’s a lot of work.’ You know what? Black people in America has been working really hard for a really long time. I don’t think that’s an excuse. The time to act is now and I think that we are always going to remember the companies that stood with us and those that chose to stand silent in this moment because their silence is deafening.”

Since the announcement of Sephora accepting the challenge, several of Black-Owned Beauty Brands have responded en masse to the online announcement.