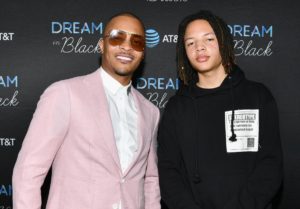 With the return of VH1’s hit show, Family Hustle, many fans have noticed T.I.’s son has been absent this season. In a recent interview, T.I. revealed that is son is determined to carve out his own path. He stated that Domani chose not to renew his contract with the network after two seasons and turned down $80,000 to appear in the background.

“He don’t f*ck with it at all. That man gave up, I think for one season, I think it was $80,000. They told [Domani], ‘All you’ve got to do is just show up for a couple of [scenes]. You ain’t even really got to do too much. We’re gonna pay you for the whole season, just for being in the background.’ He was like, ‘No, I’m straight’. He real serious about making his own path. He have a keen intent to separate his legacy from one”, stated T.I.

Domani is also an artist and has been seen working on his music in several other seasons. He recently released a new single and music video entitled “The Truth”.

Domani stated that “the video is about a young man being honest about his feelings while fighting his demons and fighting temptation”. He continued by stating he knew he wanted to make a name for himself since a young age. “It was really at a young age, I just knew I wanted to go on my own path. I used to try too hard not to follow certain people or follow certain things, and that would lead me off of my own path. I really just kind of had to get in between that sweet spot and find myself and my path. I think the music can really show that I’m finding and I have found myself.”