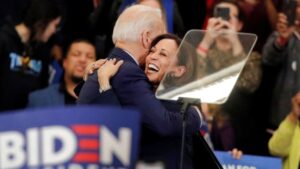 2020 Democratic Presidential nominee, Joe Biden, has selected Senator Kamala Harris as his vice presidential pick. Harris has made history as the first Black woman nominated for vice president by a major party. Biden announced his big decision via text to his supporters stating, “Joe Biden here. Big news: I’ve chosen Kamala Harris as my running mate. Together, with you, we’re going to beat Trump.”

When I called @KamalaHarris yesterday to ask her to be my running mate, I wanted to make sure Jill and Doug got to say hello.

On Twitter, he continued his praises by calling Harris a “fearless fighter” and “one of the country’s finest public servants.”

The character of our country is on the ballot this year and I’m honored to serve by @JoeBiden’s side as we fight to rebuild our country back better.

We can do that, but we need your help. Chip in any amount to join our grassroots fundraiser tonight→ https://t.co/2ey803sF0u

Biden has been urged to pick a Black Woman as his running mate since Georgia Floyd’s death sparked a cry for racial injustice in America. Now that Harris has been chosen many have expressed the prominence of her being the top pick of the political party.

“To see a Black woman nominated for the first time reaffirms my faith that in America, there is a place for every person to succeed no matter who they are or where they come from”, stated US Representative Val Demings.