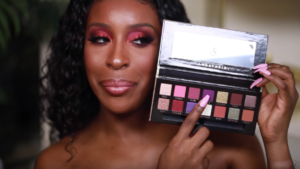 So excited for this! pic.twitter.com/ZXhc2dbwVM

“I’m so excited to be a part of something that shows our impact as Black women in beauty. I hope through this project people will see that so many of us are passionate, multifaceted, and more than what you see outwardly. It is an honor being a part of a community that encourages so many of us to believe in ourselves and to look and feel beautiful even when often times the media encourages otherwise”, stated Aina.

Filming will start this Fall for the documentary.