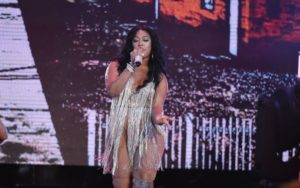 After receiving backlash for her comments about Miami protestors, Trina publicly apologized on her Trick ’N Trina Morning Show on Miami’s 99 Jamz. She stated that her comments weren’t directed at Black people who are working to bring change.

“I just want to say I apologize sincerely to everybody I offended by what I said. I spoke passionately about how I felt about people destroying our community here in Miami. I’m not going to say ‘Black people are animals’. But I didn’t say ‘Hey all of my people I’m not talking to you’”, she stated.

“We spoke to the commissioner, I said to Trick [Daddy], ‘I learned a lot more about what’s really happening’, because I’m trying to get what’s the solution, what is the answer to everything that is happening? It’s more than just people in the streets doing whatever, it’s the commissioners, it’s the governor, it’s the mayor, the chief of police, I had no idea of that and now I’m understanding that. These are the people that has to protect the cities. These are the people that you want answers from, you want change”, she continued.

Check this out>>>  2 Chainz’s Restaurant Shut Down After Violating Covid-19 Guidelines
Related Topics:Trina