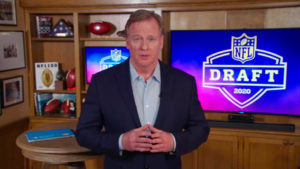 Last week, NFL Commissioner Roger Goodell took to the NFL’s social media accounts to say that the league had made a mistake by the way they handled players that kneeled during the national anthem. He also stated thatchy were wrong for not listening to Colin Kaepernick.

“Protests around the country are emblematic of the centuries of silence, inequality and oppression of black players, coaches, fans, and staff. I will be reaching out to players who have raised their voices and others on how we can improve. We the National Football League, condemn racism and the systematic oppression of black people. We, the National Football League admit we were for not listing to NFL Players earlier and encourage all to speak out and peacefully protest”, stated Goodell. He also added,”Without Black players there would be no National Football league”.

We, the NFL, admit we were wrong for not listening to NFL players earlier and encourage all to speak out and peacefully protest. We, the NFL, believe Black Lives Matter. #InspireChange