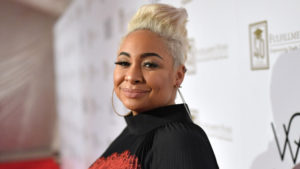 Raven-Symone has been in the public eye for most of her life. Many may remember her first iconic role as little Olivia on The Cosby Show. In 2013, she decided to come out as a lesbian.

During an interview with Garcelle Beauvais, she confessed that she had “reservations” about playing a lesbian on the film ‘A Girl Like Grace’.

Had a #grownandsexy conversation with my girl @ravensymone on #goingtobedwithgarcelle she’s fun and her authentic self! thank you @tazzbeck for wearing so many hats in my life 🙏🏽❤️#podcast #GTBWG new episode every Thursday at 12am PST/3am EST

During the interview, Raven also mentioned the difficulties she encountered while growing up with mixed feelings about her sexuality.

She continued by saying, “I remember my moused to be like he’s so sexy, and I’m like, but she’s sexy too. Why don’t you say that? Why am I the only one thinking that she’s sexy too? But, you’re only talking about him. Is something wrong with me?”

Check this out>>>  Khloe's Baby's Name Is...
Related Topics:A Girl Like GraceRaven Symone