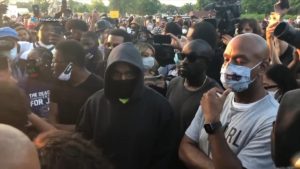 Kanye West was seen marching with protesters in his hometown of Chicago. According to USA Today, West called youth protesters to express his desire to march. Shortly after West decided to march a video of him went viral on social media via NBC Chicago’s Trina Orlando.

.@KanyeWest was spotted protesting in the #BlackLivesMatter protests in Chicago yesterday. pic.twitter.com/HHKV35vrI5

Many fans judged West after he seemed uncharacteristically quiet after the death of George Floyd, Breonna Taylor, and Ahmaud Arbery. However, West had quietly donated over $2 Million to the families for their legal fees. He also set up a college fund for George Floyd’s daughter, Gianna.