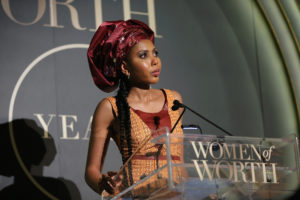 French cosmetics company, L’Oreal Paris has had several honorable celebrities represent their brand in the past. However, they have never had anyone like Jaha Dukureh. Jaha Dukureh is not only the new international ambassador of the company, but she is also a well-known women’s rights activist.

Dukureh is a U.N. Women Regional Goodwill Ambassador for Africa. Some of her other accolades include L’Oreal Paris’ Women of Worth award, Time Magazine’s most influential people list, and most recently a Nobel Peace Prize nominee. Dukureh also founded a non-profit called, Safe Hands for Girls, which works to end female genital mutilation (FMG).

“Developing the sense of worth in girls everywhere is crucial. Together we are able to stand in our truth and never allow anyone or anything to stand in our way. Everyone deserves to live a meaningful and worthy life” Jaha Dukureh @jahaendfgm, new International Spokesperson to join the #lorealparisfamily

“Very proud to welcome our newest spokesperson, @jahaendfgm, to the #LorealParisFamily. Honoree for the Women of Worth Award and nominated for a Nobel Peace Prize, Jaha is a fearless activist, fighting to end female genital mutilations”, stated the brand on their Instagram.

Dukureh also took to Instagram to announce her partnership and also announce her gratitude for the opportunity. She is set to make her debut later this year for the company’s Color Riche campaign.

Check this out>>>  Munroe Bergdorf Gets A New Job And An Apology From L’Oréal’s New President
Related Topics:Loreal Paris