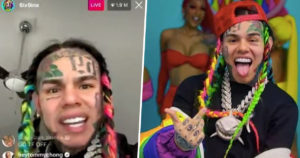 Tekashi 69 made his long awaited appearance on Instagram Live after his release from prison due to the Coronavirus. During the 13 minute lecture on Instagram he declared himself a legend at the age of 24 years old and defended his snitching to the police.

He continued by saying he wasn’t loyal because the members of his gang weren’t loyal to him. “Listen, I snitched, I ratted but who was I supposed to be loyal to? If there is a street code and if something’s so called loyalty and everything and no snitching and all of that, I get it. I’m a rainbow- haired Mexican Kid. I rap. I’m not ‘bout that gang sh*t, but listen, I know how to get us out. You wasn’t loyal to me”.

He ended the live by thanking all his fans, his legal team, and the judge for his early release. Since his release he has also released a new single called “GOOBA”. The live had over two million views making it one of the most viewed Instagram lives in history.