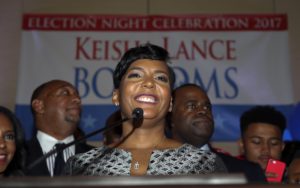 Mayor of Atlanta, Keisha Lance Bottoms, received a lot of support on social media after she posted a text message she received anonymously.  The mayor says she received the text while her daughter was looking over her shoulder.

Please follow the science and listen to the experts. We MUST continue to stay home to save lives.

This text comes after Mayor Bottoms disagreed with Governor Brian Kemp’s decision to reopen Georgia businesses such as hair salons, nail salons, and bowling alleys during the current pandemic.

‪With my daughter looking over my shoulder, I received this message on my phone. I pray for you. ‬ ‪“Conscientious stupidity or sincere ignorance.”‬ ‪~Martin Luther King, Jr.‬

“I have a good working relationship with the governor and I know that that will continue, but on this we disagree.  And his authority as governor is what it is, and it certainly supersedes my authority as mayor on paper but it doesn’t supersede my voice, and I will continue to use my voice to urge our communities, our business owners and our residents to say in”, Mayor Bottoms told Atlanta’s 11 Alive.

Check this out>>>  Quarantine as a Student: How I've Made the Most Out of It
Subscribe
0 Comments
Inline Feedbacks
View all comments