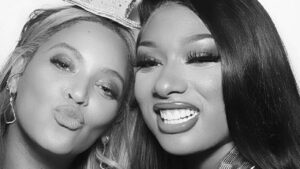 Beyoncé is the latest celeb to send flowers to Megan while she recovers from surgery after being shot. Megan posted a picture of the flowers and the card on social media.

“Queen, sending you all my love. God Bless, Beyonce”, the note read.

The Texan duo recently collabed on the “savage” remix song together which recently sold over 3 million copies.

Megan also received a beautiful arrangement of flowers from Rihanna and the Fenty Team! Meg recently became an ambassador of the Savage X Fenty lingerie brand.

“Wishing you a full and speedy recovery, Meg! Just know you’ve got a whole crew over here sending good vibes your way”, the note read.

Tory Lanez allegedly shot Megan in both feet following a dispute after they left Kylie Jenner’s pool party. Megan later revealed on Instagram live that had to have surgery to remove the bullets. We’re happy to see these queens life her up during this difficult time.