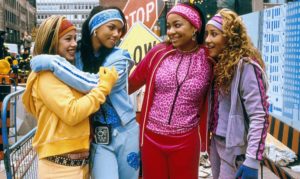 While promoting her new single “Spacetruck” Raven Simone revealed it would take a lot to get the girls of the Cheetah Girls to come together for a reboot.

“I need to talk to the girls first because we need to curate an answer. This can go so sideways on so many levels. Listen, I’m down with Adrieen Bailon Houghton, whatever Adrienne’s down to do, I’m down. I will work with Adrieen for the rest of my life. She’s awesome sauce. I love everybody in their own ways”, stated the Disney star.

She continued by saying, “The message of the Cheetah Girl movement is the most beautiful thing I think I’ve ever been a part of and the stories that can come out and have come out have shaped and molded many generations, which is awesome sauce! And yes, how I would love to be a part of that brand again. But it needs to be genuine. We all have to be there”.

The question came to light when Kiely Williams (Cheetah Girls and 3LW) member called out former group mate Adrienne Bailon- Houghton for “pretending to be [her] best friend”.