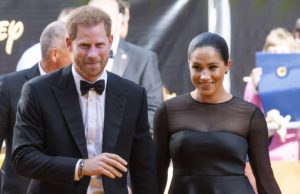 Prince Harry and Meghan Markle has signed with the world’s leading speakers bureau, The Harry Walker Agency. According to Vanity Fair, the royal couple is among great company which includes a roster of other notable celebrities including Bill and Hillary Clinton, Barack and Michelle Obama, Stacey Abrams, Shaquille O’Neal, Venus Williams, and Tyler Perry.

After leaving the royal family, many wondered what would be the couple’s next step. According to royal biographer Andrew Morton, Harry and Meghan are the “hottest ticket in Hollywood” and they could earn “hundreds of thousands of dollars both through public speaking and meet and greets.”