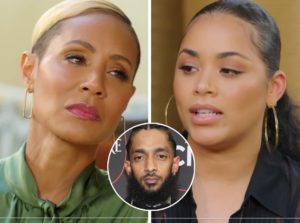 On a recent episode of Jada Pinkett- Smith’s episode of Red Table Talk, Lauren London, spoke about coping with the grief of Nipsey’s death. She also discussed the conversations that she has had with her children about gun violence and how to discuss police interactions.

“What I instill in them is more about the police. How to handle yourself when you get pulled over. That’s more of my education, protecting them being Black men in America”, she told Jada.

She continued by stating, “In high school, a lot of the boys were in gangs, and I remember that a lot of our friends, by summertime they were gone. They had transitioned from gun violence. So you kind of got…I don’t want to say numb, but used to hearing it”.

London also stated that Nipsey touched and inspired a lot of fans. “I love to meet people that Nip has really inspired because it feels like he’s still here. He would have loved to hear that, you know?”

This is London’s second public interview this year since Nipsey’s death last year. Her first interview took place on Instagram Live on the Black Girls Rock account, where she discussed her life in quarantine and mother’s day.