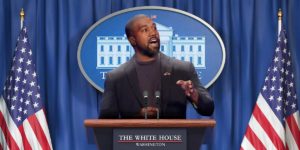 Kanye West is very serious about running for president of the United States. Although he has not filed the official paperwork with the Federal Election Commission he has publicly announced his Vice Presidential pick.

In a recent interview with Forbes, he revealed that Ms. Michelle Tidball will be his running mate. Tidball is a preacher in Wyoming that holds “various degrees in mental health and criminal justice.” Her bio also reads that she has worked as a mental health therapist for 10 years. She now also offers life coaching to people by “using biblical principles and wisdom.”

At this time it is unclear of how the two are acquainted but it is believed that they met in Wyoming where West owns a 4,000 acre ranch.