One year after the disappearance of Spc. Vanessa Guillen from Fort Hood, Texas, Army officials dedicated a gate on the post that carries her name to honor her memory. Family members and the Fort Hood command gathered across from the Vanessa Guillen mural located in downtown Killeen for a dedication ceremony. The event was closed to the public but was live-streamed on the family’s Facebook page.

The plaque installed on the gate marker leads to the 3rd Cavalry Regiment, “where (Guillén) lived day-to-day, where she served her country honorably,” said Lt. Gen. Pat White, commanding general of III Corps and Fort Hood at the ceremony.

“So in coordination with the family, who agreed to allow us to do this, we are going to dedicate a gate that has her name on it — and her picture — and you can come to learn just a little about Vanessa. But mostly it’s so [in] two, three, four years we haven’t forgotten what this is all about, what this moment is all about in our history,” he said.

The unveiling of the gate was called by the Guillen’s as a good start. ”This is a step because everyone that comes through this gate, as a soldier or someone who lives here, they’ll remind themselves that if they know somebody that is going through the same situation that my sister went through to speak up,” said Lupe Guillen, Vanessa’s sister. 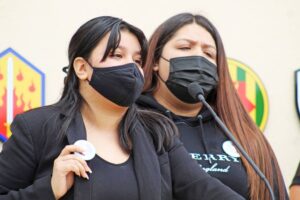 Natalie Khawam, attorney for the Guillen family, said that more needs to be done to protect soldiers who are victims of sexual assault and harassment, like Spc. Guillen. ”There needs to be reform, and if it required Vanessa’s death to start the reform, to start this movement, the momentum is here. We just need to solve it through legislation,” she said.

”We must demand for the #IAmVanessaGuillen Act to pass. That’s the only thing that I believe will help others,” added Lupe.

Vanessa Guillén disappeared on April 22, 2020, when she was only 20 years old. Her body was later found on June 30, near Fort Hood in Killeen, Texas. Her death sparked national discussions on sexual harassment and misconduct in the military, following the revelation that she had told her family that she’d experienced harassment at the base she worked.

The act is a bipartisan bill that contemplates a more confidential reporting system, would make sexual harassment within the military a punishable crime, and permit sexual harassment or assault survivors to file claims within the Department of Defense for compensation. Rep. Jackie Speier, (D-Calif.), plans to reintroduce the I Am Vanessa Guillen Act the week of May 10 on Capitol Hill, NBC reported.

Check this out>>>  ATLANTA BASED MAGAZINE COMES THROUGH WITH A NEW ADDITION TO CELEBRATE THE 7TH ANNIVERSARY OF THEIR PUBLICATION
Related Topics: