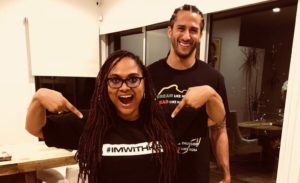 Colin Kaepernick will be the subject in an Ava Duvernay directed Netflix 6 part series displaying the high school sports life of the former San Francisco 49er star and activist. This was announced Monday morning and the series will be called “Colin in Black and White,” Kaepernick is said to be the narrator of the series and executive producer of the project. There will be an actor cast to play him as a youth in the scripted drama of a Black child adopted by a white family.  It will also be written by Michael Starrbury. DuVernay and Starrbury previously worked together on the   Emmy-winning   Netflix miniseries   “When They See Us” about the Central Park Five case. Ava Duvernay becoming a powerhouse in Hollywood and one of Netflix’s most profitable individuals has worked on the  2014  drama  “Selma,” about the   1965  Selma to  Montgomery march for voting rights. During award season she also became the first black female director to have her film nominated for the Academy Award for Best Picture. During Duvernay’s latest comments amidst the news. 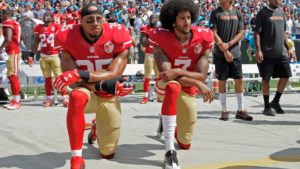 “With his act of protest, Colin Kaepernick ignited a national conversation about race and justice with far-reaching consequences for football, culture, and for him, personally. Colin’s story has much to say about identity, sports, and the enduring spirit of protest and resilience. I couldn’t be happier than to tell this story with the team at Netflix.”The time table is ultimately unknown because of the stopped production on projects due to the COVID-19. It’s very unclear when this project will be going into production. Kaepernick also has other media projects in the works, including a deal with Audible for the audio recording of his upcoming memoir.