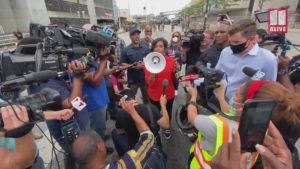 Keisha Lance Bottoms took to the streets on the evening of June 4 to march and talk to protestors due to the national outcry of the deaths of George Floyd, Breonna Taylor, and Ahmaud Arbery.

“We are gathered to honor those who have died. Their lives mattered. I’m out here today to tell you that you all matter to me. What I see right now as we’re all on our streets together, we are grieving together. We are feeling each other’s pain and the solutions will come”, Bottoms stated to a crowd of protestors.

Mayor Bottoms then reflected on the Black Lives Matter Movement. Stating that the movement was not a one-time event but that organizers succeeded through planning.

“We are in the midst of a movement in this country. But it’s going to be incumbent upon all of us to be able to get together and articulate more than our anger. We’ve got to be able to articulate what we want and our solutions”, she stated.

The mayor’s decision to march came after she terminated two police officers after they were caught tasing two Atlanta college students on live tv. She stated that the video was “deeply disturbing on many levels”. The officers were later charged with aggravated assault and battery.