Earlier this week, the state of Georgia received multiple backlash from the entire nation including the mayor of Atlanta Keisha Lance Bottoms and president Donald Trump when Governor Brian Kemp made an announcement to reopen the state which began on April 24th. Tyler Perry is going along with the order and is currently working on an active plan to safely reopen his well-known movie studio. 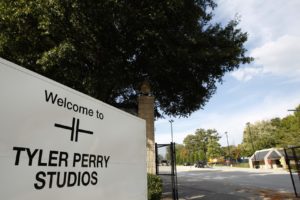 The 330-acre lot is located in the heart of Atlanta on the historic grounds of the former Fort McPherson army base. The major motion picture studio, one of the largest production facilities in the country, showcases about 40 buildings on the National Register of Historic Places, 12 sound stages, 200 acres of greenspace and a diverse backlot.
According to TMZ, Perry is not in a sudden hurry to reopen his studio right away following Gov Kemp’s recent end to the stay-at-home orders, but instead, he is trying to figure out ways to get things back up and running slowly but surely. Sources reveal that as a start to getting things back to normal, Tyler will be implementing guidelines that will be enforced to ensure that everyone remains healthy and safe while on set.

All productions scheduled at the studio will require the cast and crew to check in before filming begins so that they can be tested for COVID-19. If tested negative, they will proceed with access into the studio with possibility of staying on the premises until filming is complete. The first production would be his own shootings, each one of his shows takes about 2 to 3 weeks to film. The studio also has facilities such as a gym, bar and restaurants that the crew can use during their stay on the premisis. There is even a hospital that was built for one of his previous productions that would possibly be transformed if he decides to bring a medical staff on board as well.

These procedures will keep the cast and crew safe and will also prevent anyone from getting in contact with the deadly virus and spreading it during filming.