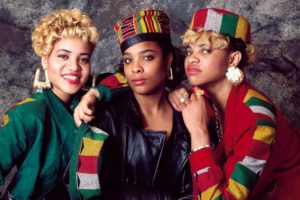 Lifetime debuted the trailer for the Salt-N-Pepa Biopic earlier this month. Directed by Mario Van Peebles in Toronto the three hour mini series will feature the group’s hit singles “Push It”, “Let’s Talk About Sex”, and “Shoop”. The film will star GG Townson as Cheryl “Salt” James, Laila Odom as Sandra “Pepa” Denton, and Monique Paul as Deidra “DJ Spinderella” Roper. The film is executive produced by Salt and Pepa.

As of now there isn’t a release date for the biopic but it is set to be released later this year. Check out the trailer below.