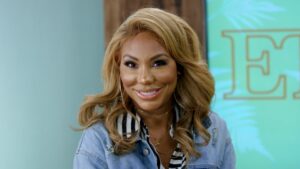 Last week Tamar Braxton was sent to the hospital due to a suicidal overdose attempt. Thankfully her boyfriend, David Adefeso, found her and immediately dialed for help. Braxton was stabilized at the hospital but stayed unconscious for days. This week a close source reported that Braxton was “awake and communicating”.

The source has also reported that Tamar has been transferred to a hospital that specializes in mental health.

“Tamar is not out of the woods by any means. Doctors are still keeping a very close eye on her safety. Tamar has been committed to working on her mental health for some time, but she experienced some setbacks during the last year, finding quarantine to be particularly difficult”, the source told E! News.

The Braxton’s spokesperson also made a statement thanking fans but also asked for privacy during this time.

“The outpouring of support that Tamar has received is a testament to the light that she brings to people. Out of respect for Tamar’s privacy and that of her family, no additional information is available at this time”.

Check this out>>>  Beyoncé Set To Be Honored With The 2020 BET Humanitarian Award
Related Topics:Tamar Braxton