Covid-19 made us miss out on a lot of our favorite sports. After waiting months to get back on the court and field, players have called it quits again after the shooting of an unarmed black man in Wisconsin took place.

Jacob Blake, 29, was shot seven times by officers in Kenosha Wisconsin after attempting to break up a fight. A very disturbing cell phone video shows the unarmed man trying to get into his car and then being fatally shot in his back in front of his children.

It all came as a surprise when sports like the NBA, WNBA, MLB, and FC decided to cancel scheduled games that they had this afternoon. Teams took to social media to announce their postponing of games to stand up for what they feel is right.

Sports anchor, Kenny Smith, walked off the set of ‘Inside the NBA’ to show his siding with the players. 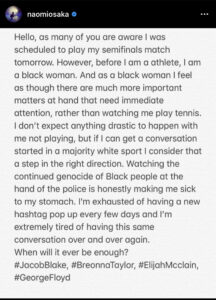 Tennis player, Naomi Osaka, posted a message on social media saying that she will not be competing in her match this afternoon.
Blake is now paralyzed in the hospital, but we hope to hear his story soon. We will keep him and his family in our prayers.