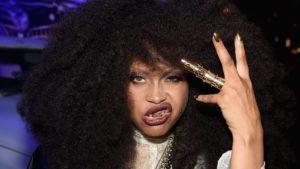 Erykah Badu is using her creativity to produce another entrepreneur endeavor. Badu, 48, plans on creating an incense line made of her underwear that will be sold on her online store. The product line will be called “Badu’s P-“.

She also stated how the incense would be made. “I took lots of pairs of my panties, cut them up into little pieces and burned them. Even the ash is part of it”.

Check this out>>>  R.Kelly Arrested on Federal Sex Charges

As of now, there isn’t a release date hasn’t been released for the incense.

The Strahan, Sara, and Keke Canceled By ABC Network

Disney World Employees Petition Park Reopening Due To The Coronavirus

Jay-Z’s Made In America Festival Postponed To 2021