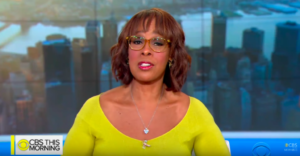 “I am mortified. I am embarrassed and I am very angry. Unbeknownst to me, my network put up a clip from a very wide ranging interview totally taken out of context and when you see it that way, it’s very jarring. It’s jarring to me. I didn’t even know anything about it”, stated King.  After Gayle King blasted CBS network for promoting the clip of her interview about Kobe Bryant, the network promised “changes”.

Three-time @WNBA MVP @LisaLeslie told @GayleKing what being at the 2008 Beijing Olympics with her longtime friend Kobe Bryant was like, and how his death has affected people all around the world. . . #kobe #bryant #kobebryant #ripkobe #ripkobebryant #basketball #nba #wnba #lisaleslie #sports #olympics #beijing #mamba #gigi #cbs #news

They released a statement following Gayle King’s backlash and death threats stating, “Gayle conducted a thoughtful, wide ranging interview with Lisa Leslie about the legacy of Kobe Bryant. An excerpt was posted that did not reflect the nature and tone of the full interview. We are addressing the internal process that led to this and changes have already been made”.

Get To Know The Inspiration Behind Netflix’s ‘Self Made’ Series