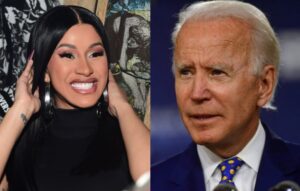 Cardi B has always been vocal about her political views and now she’s voicing her opinions again by endorsing Joe Biden for president.

Listen I don’t talk like a CNN corespondent and I don’t use all this fancy vocabulary but I do give you THE REAL while entertaining you at the same time to keep your attention on what’s important. I have a platform of 62.7 million followers and yesterday my live had 133K viewers and almost a million people tuned in. I just want to bring awareness to what’s going on in our country and around the world. I want to make sure all my followers are AWARE and make a CHANGE! WE HAVE THE POWER TO MAKE A CHANGE! And a special thank you to Bernie, you’ll always be my favorite candidate!

The raptress previously endorsed Senator Bernie Sanders for president. She held town halls with him in person and virtually on Instagram Live by asking him questions on healthcare, prison reform, and police brutality.

Check this out>>>  Cardi B Speaks Out Against Governor’s Decision To Reopen Georgia: “Health Over Capitalism”

Cardi spoke with The Breakfast Club about her talk with the presidential hopeful Joe Biden.

“What I’m saying is that I know him. I always felt like Biden balanced Obama because I though he was conservative and that’s what swayed the conservative votes, the ones in the middle. Knowing him and everything, I think he’s getting it and I think he understands the people’s pain. He’s getting what we want. People think we want so much, but we want really simple things if you really think about it. I tried to let him know like, listen we don’t want no false promises. We don’t want no fake s**t to get people voting. This is what we want. Please make it happen”, stated Cardi.