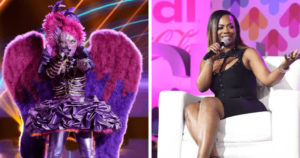 Last night The Masked Singer returned to television to reveal the winner of season three. This season was full of surprises as several stars were revealed such as Lil Wayne as the Robot, Chaka Khan as Miss Monster, and Jordyn Woods as The Kangaroo.

Congratulations to @Kandi for making history as the first woman to win the title of #themaskedsinger ! #rhoa #rhoatl #kandiburruss #entertainmentnews #celebnews #trendingnow #trending

However, the biggest reveal was when the Night Angel revealed herself as The Real Housewives of Atlanta star Kandi Burruss. Burruss made history as the first woman to win the title of The Masked Singer.

“For a long time, I really stopped singing by myself because you get negative feedback and so it kind of messes with your head. But thank you. I had really stopped and I was just really appreciative of you guys for helping me build my confidence back”, stated Kandi.

Congratulations, @Kandi, on winning #TheMaskedSinger! I can’t wait to talk with you about it tomorrow.

Today she appeared on Ellen and revealed how hard it was to keep the secret for such a long time. She also revealed that she has yet to receive her trophy due to the pandemic.

This was an excellent way to end the third season. We can’t wait to see what is in store for next season.