Aman Magazine is your digital destination for pop culture, fashion, and everything Atlanta. Aman Magazine was launched in 2013 by Editor-In-Chief Amani Sams. For five years, Aman has featured some of the most pivotal voices and socialites of Atlanta including singer Dondria, Reality TV star Shay Johnson, the WAGS of Atlanta, and rapper Miss Mulatto. Aman continues to give readers the latest news and trending topics. 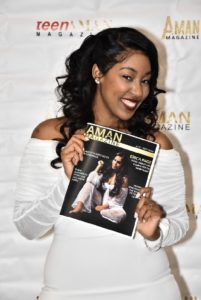 Amani Sams is the creator and Editor-In-Chief of Aman Magazine. She obtained her Bachelor’s degree in English with a concentration in Writing and Rhetoric from Georgia Gwinnett College in 2015. During her undergrad, she began Aman Magazine. She is currently pursuing her Master’s degree in New Media Journalism from Full Sail University. Aside from her overseeing the day to day operations of Aman Magazine, Amani is also a media correspondent for 106 Live Radio in Atlanta, Ga.